Libertarianism and its problems

Four years ago I wrote about how to apply the libertarian principles to appeal to both left and right wing ideologies and bring them together in a sort of Americanist centrism.

My view has changed.

The libertarian ideology should be rather seen as what it is: it is a fantasy of a political system based on freely interacting property-owning individuals. It can be contrasted with the other fringe: socialism (or communism) - which is a fantasy of a system where individuals are constrained by communal property and communal goals.

This can be wonderfully shown on a 2x2 diagram where I overlaid some markup on a pertinent internet meme: 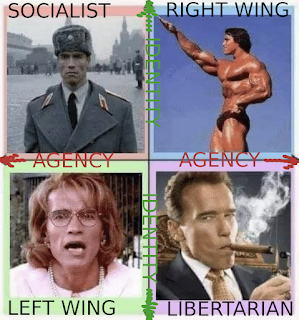 This view obviously represents the intersection of two scales - each of them ranging between two extremes. The vertical axis represents the answer to the question "who controls who you are" or "who controls your identity". The answer ranges from top=community to bottom=individual. Community can answer the question of identity in various ways: American, Protestant, atheist, white, Irish, gay. The individual answers this sort of question in a manner related to what they do: businessman, writer, podcaster, - or in a private, subjective and spiritual mode of expression. The horizontal axis is the representation of agency in the real world - it answers "who has the authority to control the material world" and the answer is again ranging from left=community to right=individual. So on the left, community is typically the authority to create and set goals for an enterprise and subordinate the activities and resources of the individuals to those goals. In socialist and fascist state the community tends to a hierarchy and the state becomes the ultimate community.  On the right end of the horizontal axis we have the individual entrepreneur bringing their product to the market as well as setting up enterprises with voluntary participation of others.

Libertarianism, being placed at the extreme of individual determination, looks very much right-wing, however, the real right and left wings of American politics, and politics in other Western liberal countries, are between the left and right liberal who alternately want to assign the control of agency and identity to the community.

The last two years contain the development of the COVID pandemic and the convulsive end of the Trump presidency in the US.

These events took place against the backdrop of an immense growth of authoritarian sentiment among the citizens of the free world. People are begging to be ruled. Begging the governments to curb economic growth to deal with climate change, begging to control people's behavior to deal with the pandemic, begging to censor speech in order to stamp out lies and misinformation in the media, begging to enforce conformity in order to be safe from racism, sexism and other varieties of perceived vice. The list goes on.

Moreover, this is happening the historic peak of unprecedented success of majority of the population of the globe where 80% of people basically live in prosperity as compared to 90% living in poverty 200 years ago. The context of historic success accentuates the enormity of the authoritarian appetite - the desire to be ruled over. This is very disturbing. It appears that about 70-75% of any given population - also of the US population in the "the land of the free and the home of the brave" - is authoritarian. That means they prefer to be ruled in most aspects of their life by a sort of external authority - in most situations, a role readily filled by government.

Libertarians should stop painting a picture of a stateless utopia of self-governing individuals, but produce examples and methods where application of libertarian principles leads to just and socially desirable outcomes. They should demonstrate how authority organically arises among individuals.

Another approach is necessary to such "winning hearts and minds" - it is the cultural angle.

Beyond economics, on the cultural front, libertarianism is hopelessly lost.

The "don't tread on me" slogan promotes - in addition to the laudable principle of individual liberty - an unwillingness to show any sort of face to the fellow human being and just points to the fence designating "my" property - fence instead of face. The property will often harbor a family and an intense intimate life within it - but the libertarian does not make that life present socially in a significant way. Libertarian guards the private from escaping into the social sphere whereas the leftist famously makes the private into political.

Libertarianism must solve its cultural problem.

One way to engage authoritarians is to enter and inhabit what many of them desire - civilization. While liberty gives you the right to bear arms for your own protection, civilization is being safe without bearing arms. Civilization is the foundational safe space. America has a strong impulse for liberty but its civilization is young and rather immature. That is why it appears to so many that the only way to civilization is through a state authority.

Libertarians ought to show publicly and socially how an internally cultivated authority is a civilizing influence.

The internal authority does not have to be a national or religious identity, which comes from external sources, - but an authority of significant personal and subjective experience - revealed in personal relations and works of art.

An important cultural front would be to socialize (but not politicize) the personal. Libertarians should be comfortable to talk openly about their personal lives, which contain many quirks and oddities, and assert the freedom from government intrusion in their lives which might be otherwise laid open. This would include talking about sexual and drug practices - which might be currently illegal or highly socially objectionable. It would lead to a certain reckoning among the libertarians as well as authoritarians who would all be made to look in the mirror.

In principle, the process of socializing the personal is made safe by civilization which allows vulnerable individuals to reveal themselves in public - as is the case with artists and free thinkers. The current punitive influence of "cancel culture" on public life would require heroic courage for such overtures.

I am not optimistic.