A question asked on social media sought to find out what we think is really at stake in insisting on the proposition that words are not violence. The idea that words are possibly violent is typically quickly dismissed by insisting, after most English-language dictionaries, that violence involves physical force and words are not physical force. However, we need to acknowledge that there are expressions such as "violent argument" and there are harsh insults that lead to violent aggression. Therefore the idea of violence has wider range than its dictionary definition.

While I completely support freedom of speech, including offensive (and violent) speech, I want to call on the classical liberal, being one of them myself, to justify freedom of speech while acknowledging that words and violence are entangled together.

The term "words" is used here as roughly covering the meaning of the Logos which includes: reason, logic, ideas, norms, rules and laws. It is the standard operating area of rational human beings.

The separation between words and violence, speech and act, is a legal construction supported through the history of human thought in order to carve out domains of free activity from controlling tyrants. To question that legal fiction, even in the name of truth, dangerously weakens this long standing effort. Unfortunately, protecting it prevents us from truly considering our relationship to violence.

The proposition about the separation of words and violence is a sort of wishful thinking that ignores the depths of our mental life, which is filled with symbolic and imaginary, yet logically incoherent, structures. They constitute our unconscious, which, according to Lacan, is structured like a language.
Before we are thinking beings we are speaking beings. And we often speak out of the unconscious, incoherent and illogical knowledge. Speech, conscious and not, arises because we are evicted from the immediacy of real life and condemned to inhabit civilization. Therefore, speech, with its symbols and norms, strives more for power than for truth, more for civilization than for satisfaction of instincts. Civilization shapes forces into powers, forces of nature that have no semantics, but our words and language are all about semantics. Words forge forces into powers. Yet since words are frequently not an expression of rationality, powers become irrational.

What is the place of immediacy of life, our seemingly lost home? Lacan would call the lost place the Real. It manifests itself to our inner life as Desire. For Freud it was the object once lost and to be found again - the place of "id", the origin repressed and deformed into the "ego" by civilized life. Rilke speaks about it in his Eighth Duino Elegy (translation my own):

With its whole eyes looks the creation
Into the open. But we have our eyes
Turned around to bar, like set traps,
Its escape and free exit.
What is out there we know only
From the animal's eyes
(...)
This is our fate: to be in relation to It,
Never It, but always in relation.
(...)
We are spectators, always, everywhere,
Looking at but never outward...
It overwhelms. And we organize. It breaks down.
We fix again. And then decline and die.

Instead of the immediacy of being we are in relation to being and owing to this insufficiency we seek power. We seek power as a technology to master physical forces and as societal norms to master the physical, visceral reality of our bodies. These norms tell us, sometimes whispering imperceptibly, under what conditions we can sit on the floor or take off our shirt or pants. When these norms, and they are basically words that have ascended to the status of power, are transgressed, offense results. Words regulate our bodies.

What is really at stake in saying the words "fuck you" or, for that matter, what is at stake in saying "love you"?(*) Why is it impolite to speak to a newlywed bride words of one's sexual passion and love in front of her new husband and wedding guests? Impolite because it points to a violent content of a certain layer of life that we access only through the proper form. For all the honey flowing from the lips of lovers and potential lovers they are road posts of desire pointing toward the violent content of our life. The melodrama genre is full of that sort of thing and it is brutal.

The melodrama of "fuck you/love you" shows how our words, speech as well as legal and societal norms, are logical and address other words - but some of them are turned toward that from which we have been evicted, from what we have lost and seemingly have to do without. Some of them are aimed directly at the intimacies which we would rather keep as secrets secured by rationalized formalities. They aim at violence.

Look at the boisterous business and sports banter! Team sports, such as American football, are tremendously aggressive and involve actual violence. It is common and accepted to use expressions that refer to aggression on the body - such as "kick ass" - as well as describing the opposing team or competition as "pussies" which invokes both bodily weakness and sexual acts. Words may not be violence but they speak of it and long for it.

What about the interest of the public in violent fantasy - as is amply demonstrated by the action-adventure genre as well as the mystery murder and crime drama? It is not only popular culture films, but critically-acclaimed literature such as JRR Tolkien's epics such as "The Lord of the Rings", that produce words and images conjuring up versions of reality supporting levels and modes of violence that seem hardly possible to enact - yet they captivate the imagination of masses of people. 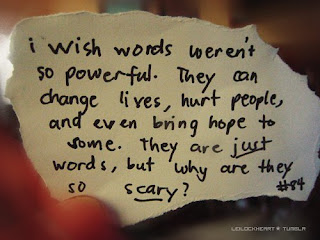 The power of words, the law that they constantly proclaim, shapes our access to reality. We will only get so much of it as the words permit us to have. The force of reality is channeled by the semantics of the language. Freud calls these channels - drives. Such regulation of access to our violent reality conceals the fact that we actually desire it. Men and women desire sex, and women additionally desire motherhood and violent childbirth. Men dream of violent struggle and dangerous exploits. As thinking and speaking beings we empower and normalize our path toward reality, toward desire that can consume our life and bring death. By doing that we become desiring beings. Our speech addressing the desire is where words engage with violence.

Words are both means of our eviction from the violent reality of life as well as means of our return to it. The free speech defenders have to be prepared to fight on much more squishy and unstable ground, prowled by the monsters of the unconscious assaulting the pure ghosts of logic.

---
(*) note how much people avoid investing the grammatical "I" in the expression "fuck you" or "love you" - because the "I" would make it a more breath-taking leap into the violent reality.
Posted by Tomasz at 16:27 No comments: