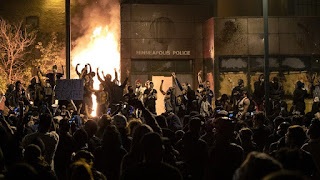 The clash against protesters and the law enforcement is very incendiary because it is an unconscious confrontation with the core problems of this society (cruelty) via an emotional (outrage) outburst rather than rational conversation.
Posted by Tomasz at 14:24

Just my two cents as a leftist from Chicago.

I think you're mostly right, that these protests are an emotional outburst in response to the outsourced cruelty of ordinary Americans. The left is always heavy on critique, light on solutions. But I'm increasingly willing to express my emotions openly, both as an everyday person and as part of a political movement, because the recipients of cruelty are rarely empowered to defend themselves, physically or rhetorically. The notion that this conversation can be rational, can be calm and unemotional, takes for granted that everyone is at the table, that everyone is safe enough to speak up, and that everyone will be heard.

From my perspective here, on the west side- which is always a violent place, the riots seem inevitable. We just hope that the uproar will be enough to mobilize the resources and effort to fundamentally change the cruel system that has pressed down on this community for generations.

Outrage culture is a strategic attempt to contextualize such cruelty within the historical biases of our colonialist society, so we can categorically eliminate the worst effects of the system typically ignored by our (flawed) democracy. I'm empathetic to people who hate outrage culture, because outraged people are often ignorant, hypocritical, and deflective- but it is true that such outrageous discrimination exists on a macro level. We have a responsibility to fix it, but cannot until most people acknowledge that it's real.